World Cup Schedule and Scoresheet is an excel spreadsheet to track the schedule and record actual results that you might have been waiting for. Since 2008, I have committed to create and provide free fixtures and score sheets for soccer tournaments and leagues. Starting with a simple Euro 2008 and then continued with World Cup 2010, those score sheets have been expanded to have more nice-to-have features to accompany people tracking their favorite teams during that global soccer events. Thanks to Microsoft, too, since they have added more features and functions to make creating this spreadsheet easier.

About FIFA World Cup itself, there are not many changes from the number of teams and regulation since 1998, the first time FIFA allow 32 teams to participate in the event. Although, it could be changed by 2026 where 48 teams could compete in the 23rd World Cup.

How To Use The Template

This World Cup Schedule and Scoresheet is my 3rd World Cup spreadsheet. Compare with the previous two spreadsheets, I have added a few features to help you personalize this spreadsheet. Furthermore, to match more on official group tie-breaker regulation. 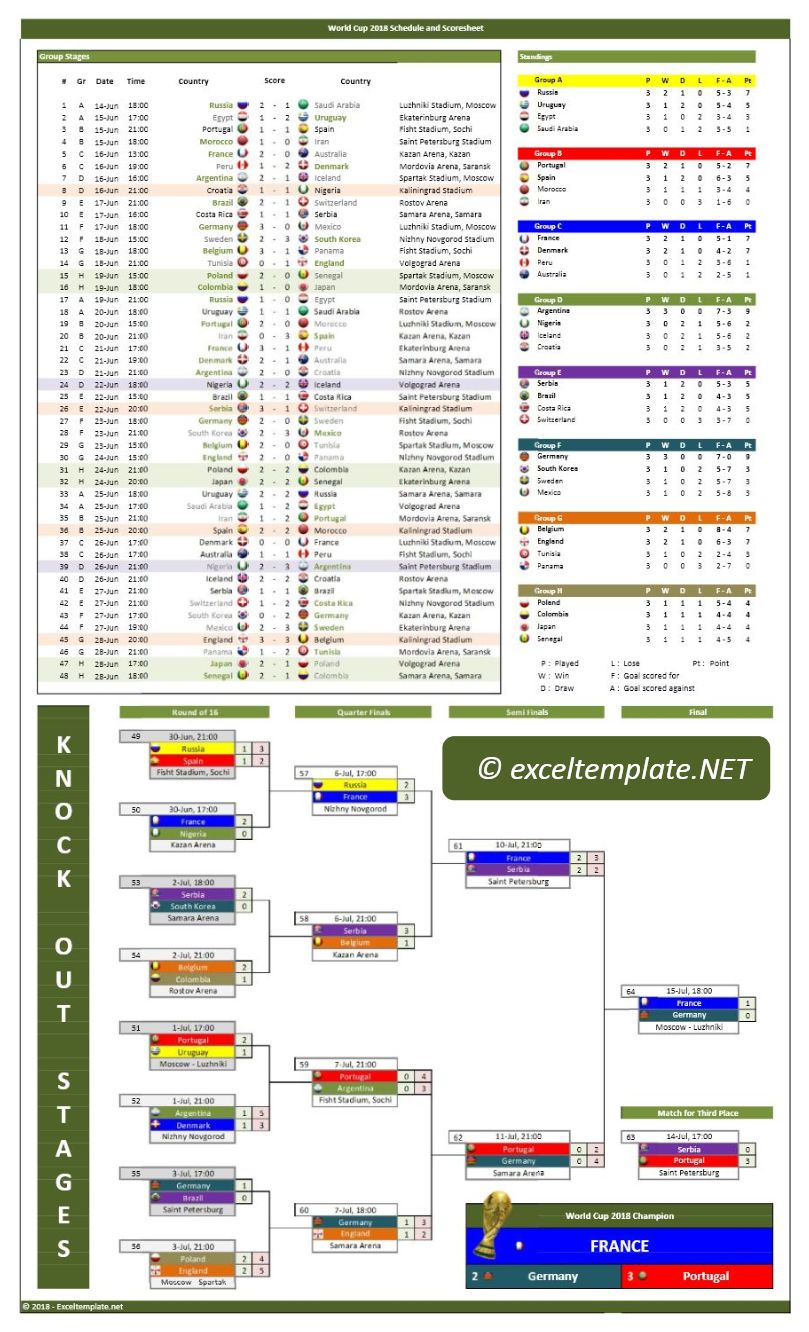 To start using this template, you can go to the upper part of this worksheet to set your language and timezone. And if you can't find one, you can personalize it by yourself from Custom Language worksheet.

You can customize this spreadsheet by setting its language to meet your own language and its timezone to fit your own time. I use Google translator tool to translate English terms to particular language. That translator tool might not translate those words/terms correctly, so you can retype incorrect translation into proper one. 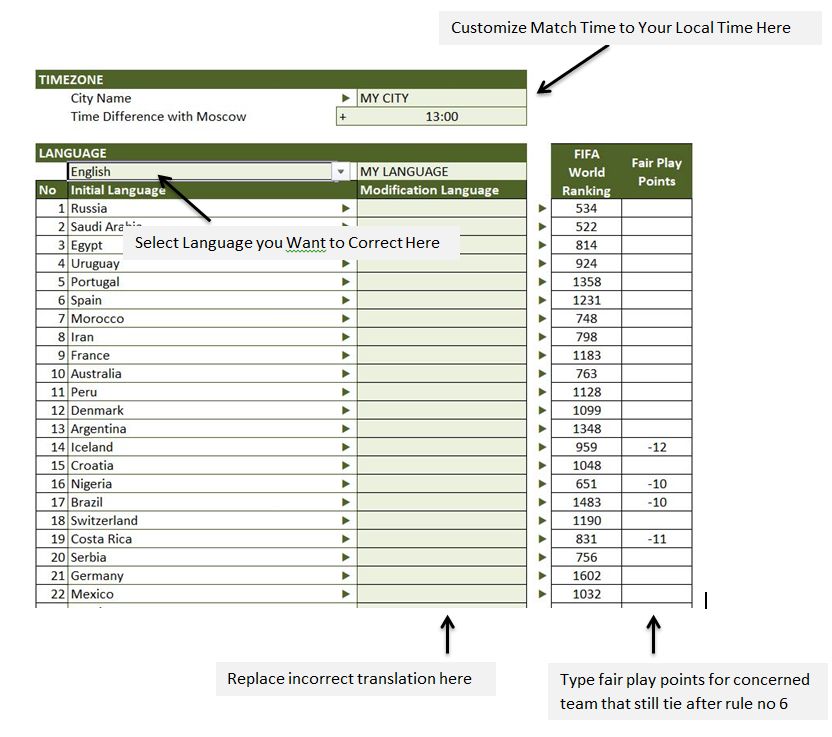 Beside those two options, you can also highlights particular group matches, team names and match venues by selecting it from respective dropdown list above score sheet table.

After you personalize this tournament worksheet, you can start typing actual results into respective boxes. You can play around with scores to see ranking movement of each countries in their respective groups.

Based on FIFA regulation, actual rankings of teams in each group are determined as follows (regulations Article 32.5):

I have simulated on how each team will rank based on tie-breaker regulation above in their respective groups in this World Cup Schedule and Scoresheet. 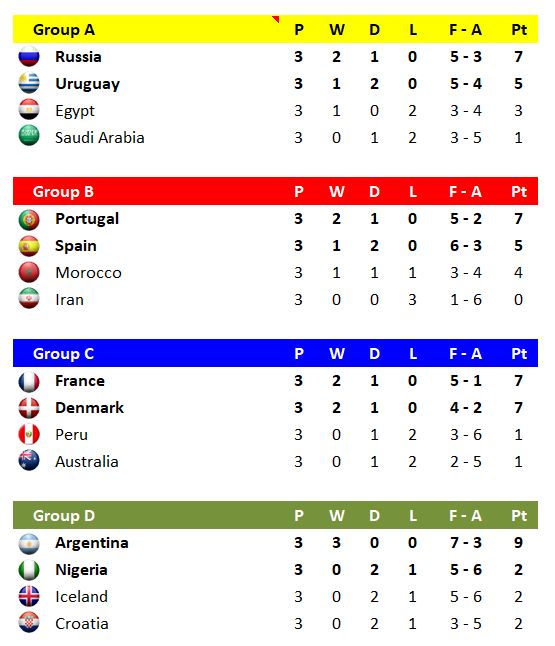 In Group A, each team has different points. Their rankings will be determined without problem based on rule no 1. It is applied to Group B as well.

In Group C, the top two teams are having similar points. But, France will be put on top because they have better goal difference than Denmark (rule no 2).

In Group D, Argentina is put on top because they never lost. The remaining three teams are sharing similar points. Since Nigeria and Iceland have better goal difference than Croatia, Croatia is eliminated. Both Nigeria and Iceland have similar goal difference and goal scored. And there is no winner in their match. It means, their ranking will be decided by fair play points (rule no 7) since the application of rule 1-6 doesn't yield a clear winner. 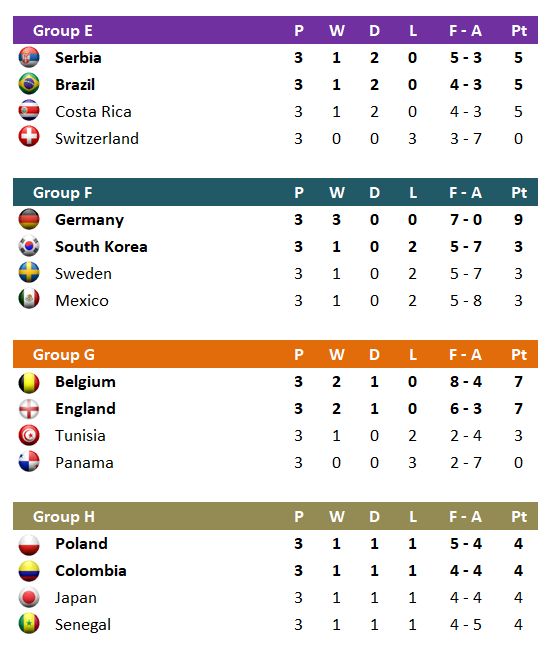 Put fair play points next to respective team in Custom Language worksheet. You can go to FIFA website to get the value if it goes to that situation. I put -10 for Nigeria and -12 for Iceland to simulate the situation. Since Nigeria have higher fair play points (-10 against -12), then Nigeria is qualified and Iceland is eliminated. This situation also happened in Group E where Brazil is sharing similar record with Costa Rica. Brazil is through because they have better fair play points (-10 against -11). You can see it applied in the second image above.

In Group F, South Korea is put on top of Sweden, because South Korea won over Sweden. Even though their group stats is similar, South Korea have the right to advance to the knock out rounds (stopped at rule no 4).

In Group G, winner and runner up is decided by rule no 2.

In Group H, all team have similar points. Goal differences have yielded Poland to become Group H Winner and Senegal to be eliminated. Rule no 4 has yielded Colombia to qualify since they defeated Japan in their match.

In 2018 year tournament, Group H produced Japan and Senegal as two teams with similar records where their ranks have to be decided by rule no 7. How to apply it? Go to Custom Language worksheet and put -4 in Japan row and -6 in Senegal row. It will switch the position and put Japan above Senegal. You can see sample on how rule no 7 implemented in second screenshot above.

What about if after rule no 7, teams are still tied? FIFA has to run Rule no 8. Since it is based on drawing, you need to type directly inside group standing table to make it follow the drawing result.

There are formulas that will automatically place group winners and runner ups in respective brackets. There are conditional formatting formulas that will show background colors based on their respective groups. As you see in group standing table, group A has yellow color where you can see it shown as background color for Russia and Uruguay in their brackets. This color will follow them if they defeat their opponents and advance to the next round. 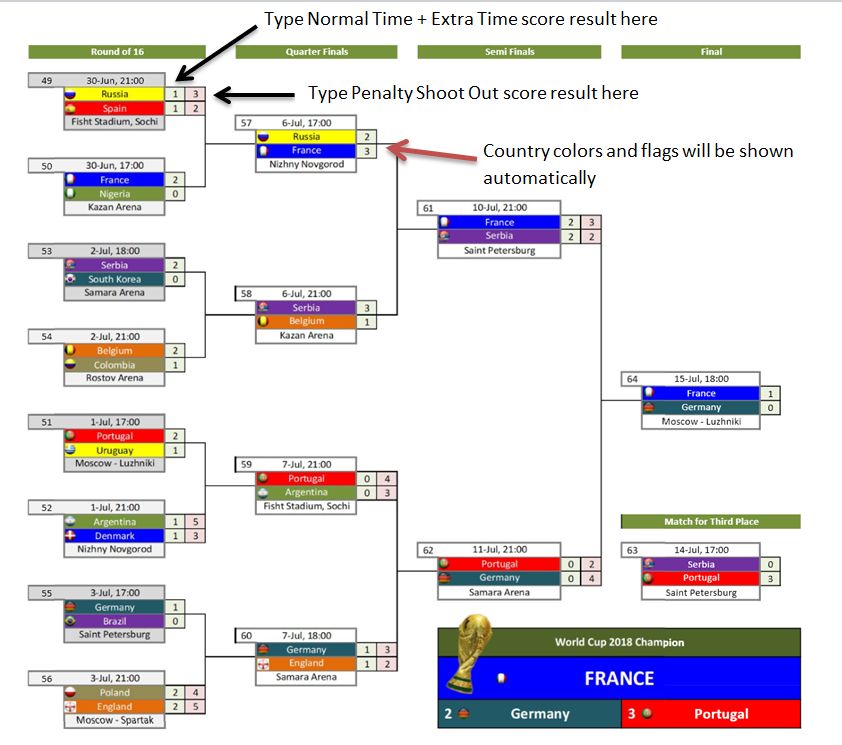 In this knock out stages, you just need to type actual Full Time score (normal + extra time) in light green boxes next to team names. If full time scores is draw, then pink color boxes will be shown where you can fill it with Penalty Shoot Out result. Team who win the match will be move to the next round automatically. Their flags and background color markers will follow accordingly. Type score results until final to complete this spreadsheet.

Watch the youtube video below to understand more about how to use this World Cup Schedule and Scoresheet.

I created only two World Cup Schedule and Scoresheet models. One with formulas to show country's flags automatically and one without it. You may use the second one if you got slow processing issues while your Excel processing your inputted scores.

These spreadsheets are free to use. But, remember that the license is only for usage within your own businesses. You are not allowed to distribute or resell it to other parties.

You might want to track goal scorers in World Cup. If that's the case, you can use this spreadsheet. It has goal scorer tracker capability. I am using my previous World Cup spreadsheet since I prioritize modification for other spreadsheets. I just replaced team names and their squads. Squad names haven't been officially announced, you need to update it with the official ones after they are available. I will update it as well.

This spreadsheet has different format than others to accommodate goal scorers.

You can see final group standings at the bottom of the worksheet. And there are temporary top scorer list at the right side where you can see names in top scorer list. Then, you can continue typing the score and selecting goal scorers for all matches in Knock Out Stages worksheet. There are 3 score boxes you need to fill, Normal Time (NT), Extra Time (ET) and Penalty Kick (PK) boxes. You will see similar background color cells with goalscorer dropdown list. The number of boxes fill follow the scores in NT and ET boxes. You don't need to type goal scorers for PK scores since top scorer calculation won't exclude it in top scorer list. But, you still need to type PK score to decide respective match winner that will advance to the next round.

You can see final top scorer list at the top of Knock Out Stages worksheet. If there are more than one player that are having similar goals, a reorder rank table will be shown to allow you to reorder their rank based on FIFA correct order. FIFA regulate that there are other parameters, those are their assists and their playing minutes to break the similar goal ties. Since I don't want to add more complexity into the formula, I made it simple by adding reorder table to rank them manually.

See this youtube video to learn on how to use World Cup Scoresheet with Topscorer.