This is a UEFA Euro 2016 Schedule and Scoresheet you can use to see the schedule and track all matches of the upcoming European soccer tournament. It took some time to map all new tournament regulations to this spreadsheet, but finally it is finished. This year tournament will have major changes in its tournament format compared with previous tournaments. This year, it will be participated by 24 countries, divided into 6 groups. They will fight for 16 places in knock out rounds. It consists of 6 group winners, 6 group runners up and 4 best third-placed teams. 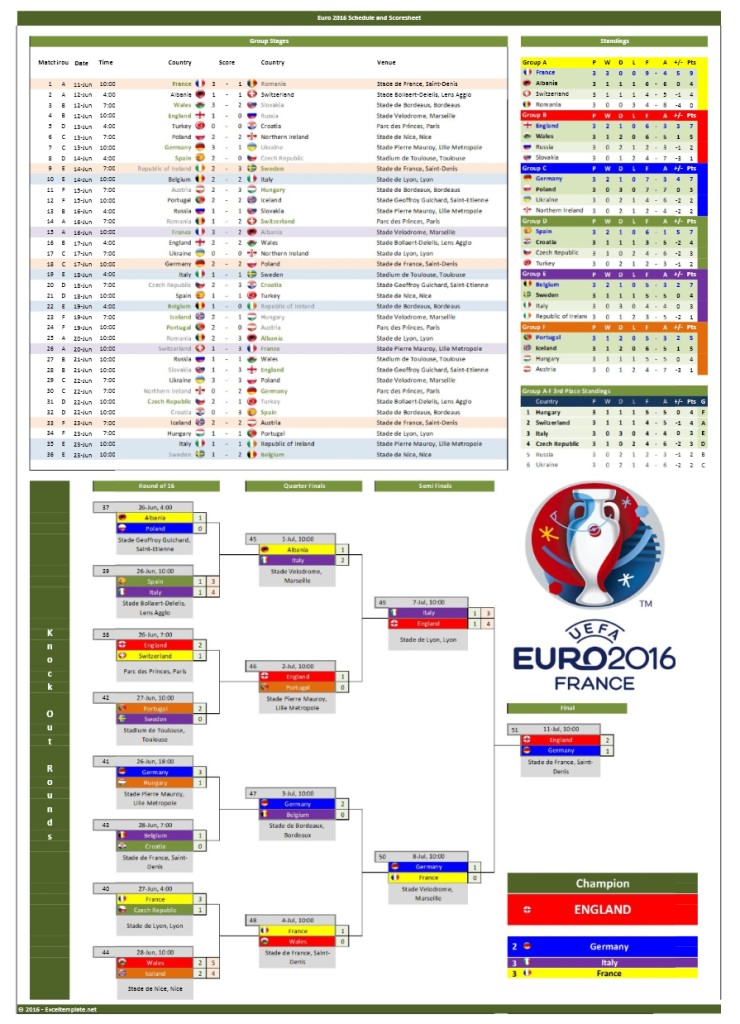 With this major tournament format change, I can't use any of my previous Euro and World Cup spreadsheets without any major modification. As you can see in screenshot below, I used my World Cup 2014 layout because I think it has a nice looking layout so far. I removed all extra time score boxes in knock out brackets, and add a separate third-place standing table to help you see which best third-placed teams advance to knock out rounds.

The standing of each team in each groups will be determined according to
1. Higher number of points obtained in all group matches

After this regulation is applied and if two or more teams are equal on points on completion of the group matches, the following tie-breaking criteria will be applied:

Tie breakers above will determine group winners and runner ups that will advance to knock out round. Third places in all groups will be ranked together with the following criteria to determine the four best third-placed teams.

As you can see above, there will be dynamic match ups between winners from group A-D and third-placed teams which could produce big matches in round of 16, where those winners will have chances to face teams from 3 groups instead of just one in previous tournament format. Below is the arrangement of pairing matches based on third-placed team rank. 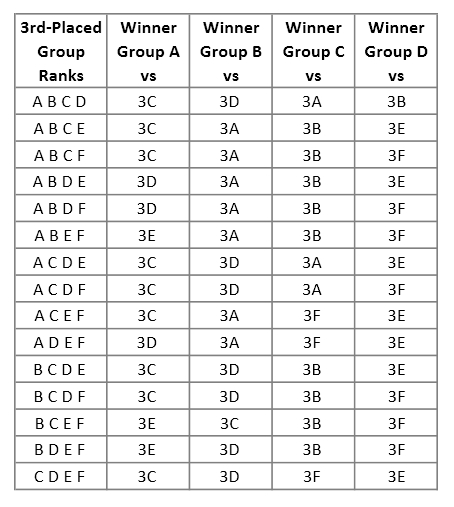 I have created new algorithms to map those rules into excel formulas where you can see them reflected in my Euro 2016 Schedule and Scoresheet. You can see Winners from group A, B, C, D will face teams from different group based on final 3rd places standings. With group color markers, you can see from which groups that finally those group winners are faced.

To use this spreadsheet is simple, you can start by typing the score results in score boxes in group matches. Group standings will be adjusted accordingly. And after all group matches are finished and all advanced teams are placed in respective knock out brackets, you can start typing scores in respective knock out score boxes. I put an automatic group color function that should inform you from which groups the teams who advance in knock out stages. You can type the full time score (normal + extra time) result in white boxes at the right side of team names. And if the score is draw, there will be a box with light red color background shown where you can filled the penalty shoot out results. You can repeat it until the final where the Champion, runner up and semifinalists will be shown on the box at bottom left of this worksheet.

There are 3 models of spreadsheets.

This one is a schedule with automatic country flag arrangement function. I made a short guide on how to use it on youtube as you can watch it below.

This fully editable template is free. But, remember that you are not allowed to sell (either as it is or as other forms) or use it for any commercial purposes. All codes are originally created and designed by me. I would be pleased if you can appreciate my creation.

One version included has no automatic country flag arrangement function. You might use this one if you can't use the first one properly.

This one has a top scorer feature where you can type goal scorer names in every matches if you want to track them. It has a totally different format than the previous two, as you can see in screenshot below. 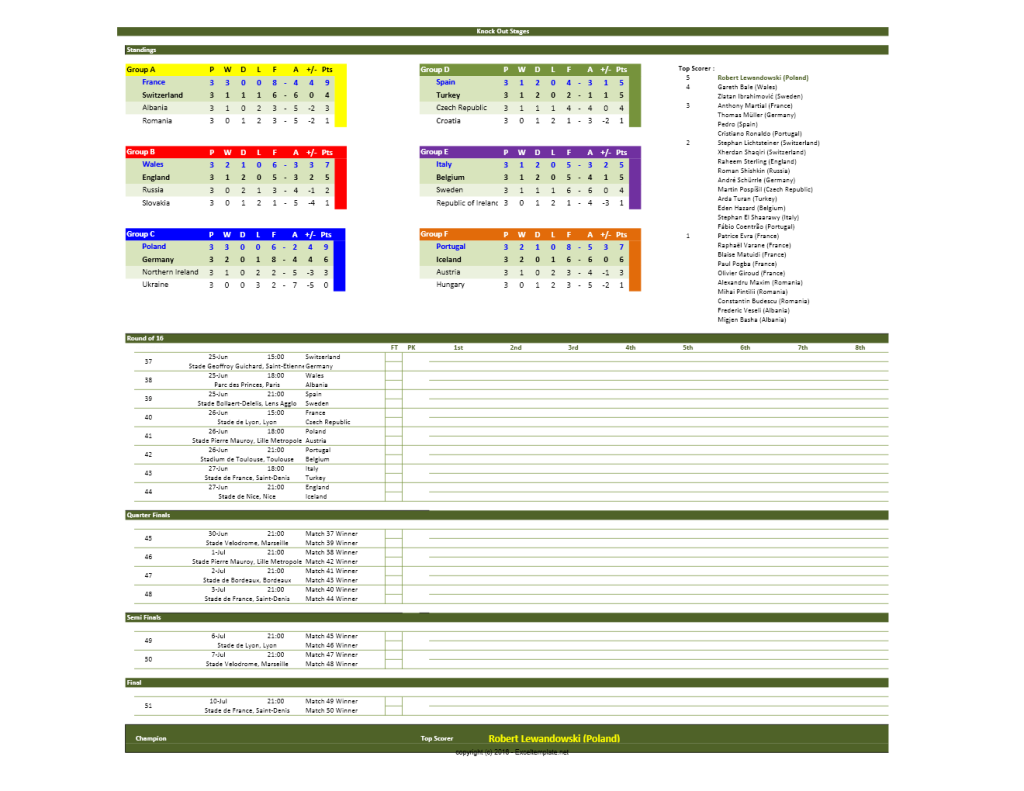 How to use the 3rd one is the same with previous 2 models, but you have to type official player names who make it on respective national teams before using it. It is filled with random players now. And to select the goal scorers, you need to type the score results to reveal player name boxes and then select the player from dropdown list in respective boxes. All group standings, knock out team placements and top scorer standings will be adjusted accordingly.

This third model has the unprotected version as well.

Let me know if you found any errors in these spreadsheets so I can fix it before the tournament is begun. Have fun guys.