These are the latest spreadsheets for European Soccer Leagues season 2019/2020 in 4 countries. Those are La Liga Santander (Spain), Serie A (Italy), Bundesliga (Germany), Ligue 1 (France).

The first matches of those leagues are started in August. It is still too early to predict which teams will become a champion by the end of this 2019/2020 season. Favorites are remain the same. Barcelona, Real Madrid and Atletico Madrid are still becoming people favorite to win in Spain. AS Roma, Juventus (Cristiano Ronaldo is here now) and Napoli are looked like will still compete for Scudetto in Italy. Paris SG and Bayern Munich are clear favorites to retain their crown. 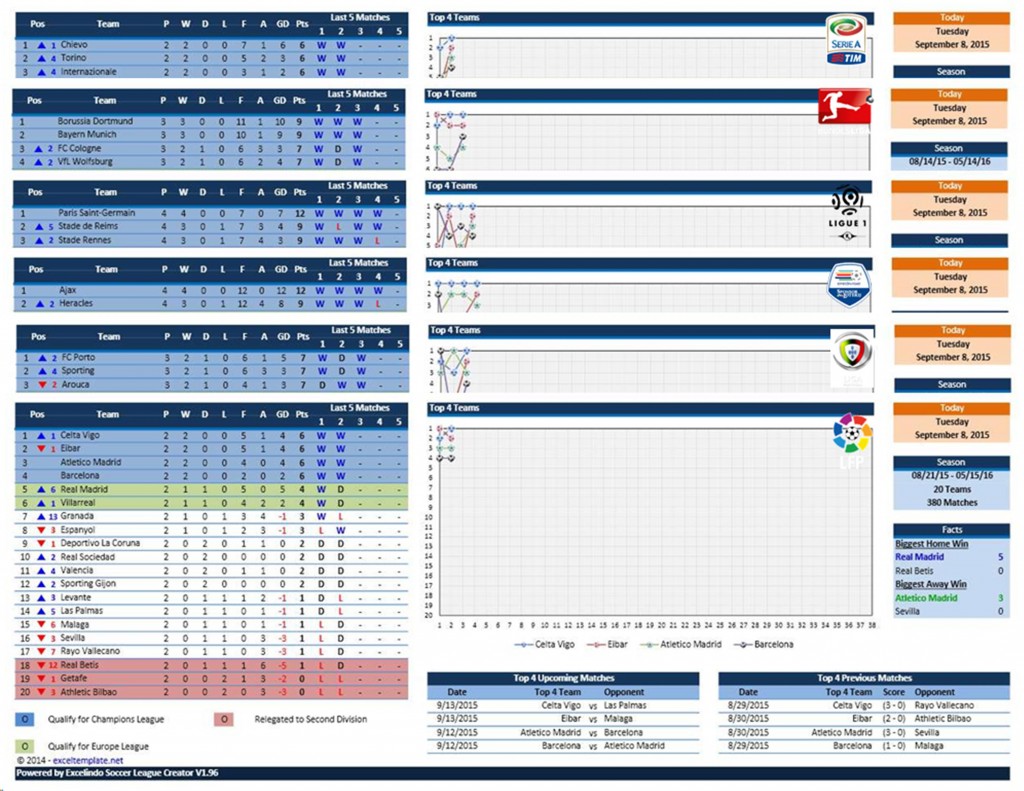 As usual, these spreadsheets are created specifically for those respective leagues. And it is the 7th time that all spreadsheets are using Soccer League Creator template to emulate those leagues. To use them is simple. All you have to do just typing the scores and see the standings adjusted automatically based on certain rules applied in each country.

You can see this video below on how to use this spreadsheet properly.

You can play around with the spreadsheet to see how to work will all available features.  And here are 2019/2020 European League Fixtures and Scoresheets:

With this unprotected version you can :

There is a new version of the spreadsheet where you can track your favorite team goal scorer and evaluate their performances. You can read more on the Soccer Team Stats Tracker page.

I started to create fixtures and scoresheet for Spanish La Liga, Italian Serie A, Germany Bundesliga and French Ligue 1 in 2008. There was England Premier League at that time before I got a warning from England Premier League license holder to drop that spreadsheet unless I paid the license fee. Each year, I added more features and started to create a dynamic template that can accommodate all of those leagues within one spreadsheet just by changing some parameters. 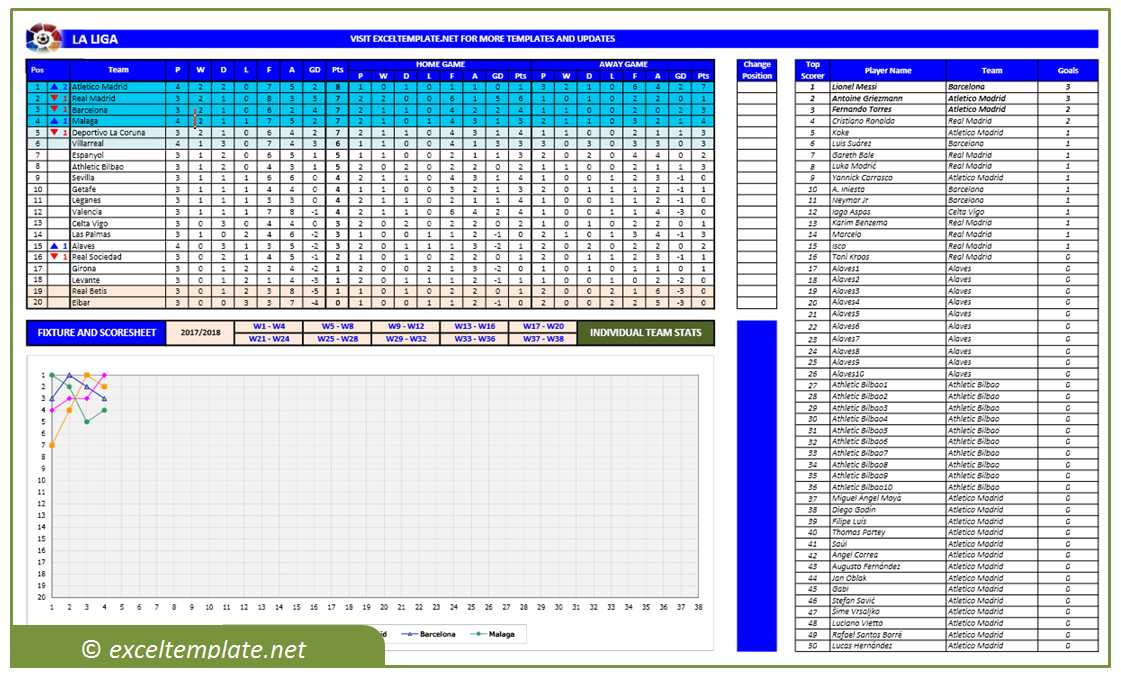 You can track the rank progress of all teams after they completed their matches. Here, you can see their performances while they were playing at home or away. They are ranked with tie-breaker regulation as follows :

Since it uses a simple tie breaker formula, you need to rerank them if their final positions are not similar with their official standing. You can use the Change Position table at the right side of standing table to switch their position.

Why don't I create the exact tie-breaker formulas? Because in this spreadsheet I tried to focus on other stats to be shown, i.e. Top Scorer and Individual Team Stats. It already consumes high computer resources when the calculation takes place. You can use the other European Soccer League Fixtures if you want have exact standing.

The top scorer table will rank 50 players from all teams. The formula will sort their number of goals and then their number of assists. Here, you can see Lionel Messi vs Cristiano Ronaldo in Spanish La Liga. This feature only available in the Pro version. There is no top scorer formula in the simple version. You must update it manually. 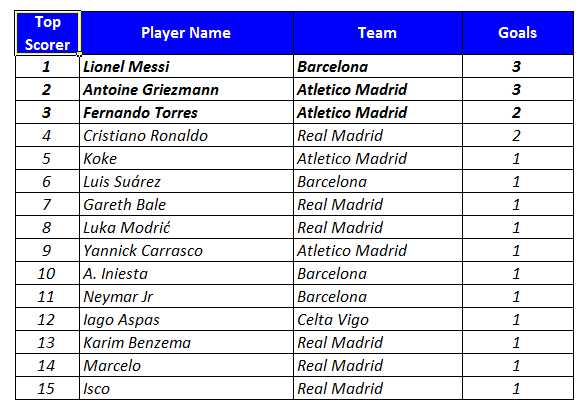 Type team names and their home stadium in this worksheet. There is a point reduction column to put point penalty if a particular team is punished by their country league official. There is a column for counting the number of team occurrences in the Fixtures and Results worksheet. You can use it to check whether you have typed team names correctly. It should be the same with the number of matches that particular teams played in respective leagues. For example, in La Liga, each team have to play 38 times within one season. 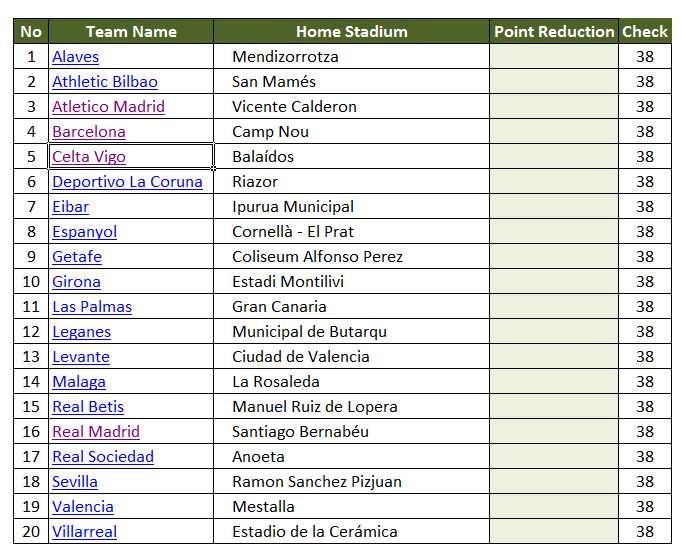 This is a one-page fixtures worksheet. You can copy and paste all fixtures in this worksheet. This is the worksheet where you update score results weekly. 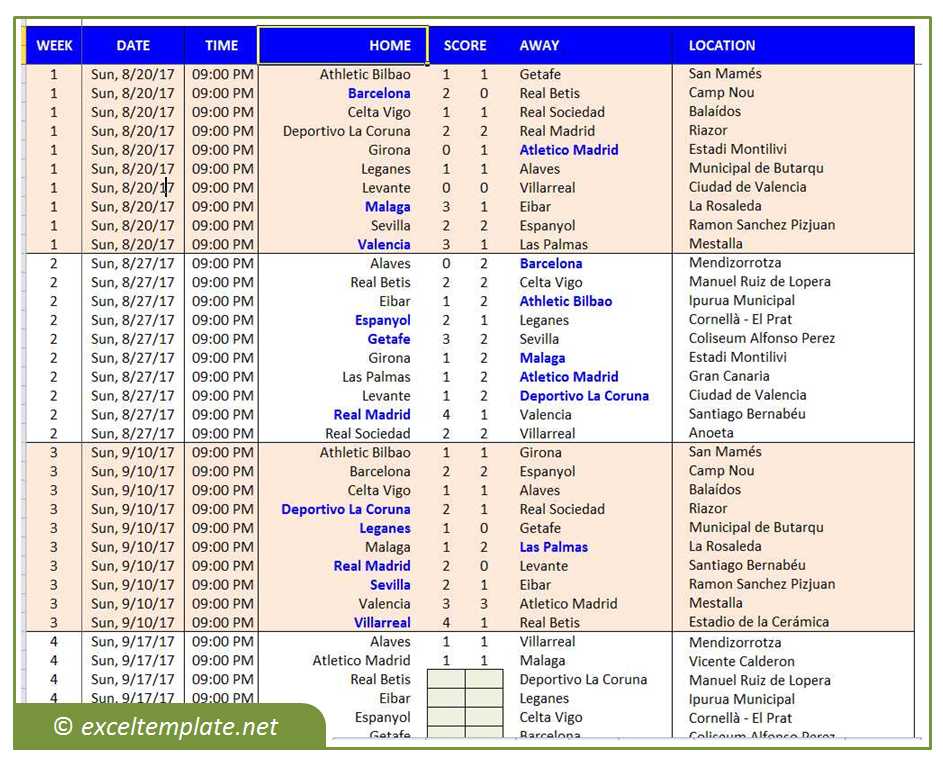 This is a worksheet where you can update particular team stats. I will explain them as follows. I separate this worksheet into 8 parts to ease the explanation as you can see in the image below. 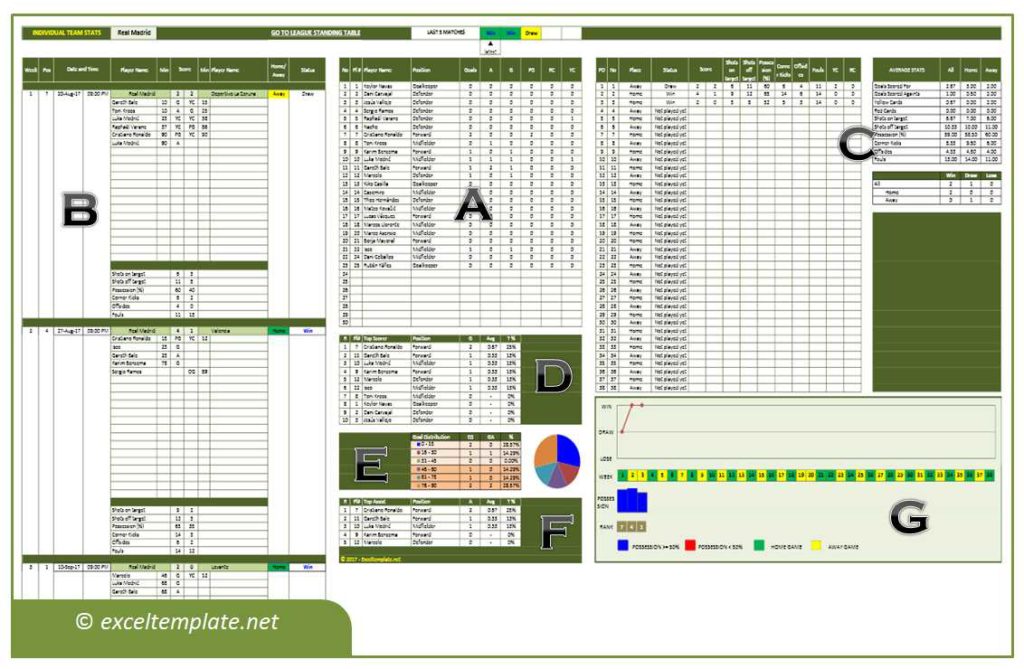 The Excel formula will place team's name automatically in each worksheet. But, in the simple version, since it only accommodates one team, you will have the option to select one team to record its match stats.

A. Player Names and Stats

In this table, you can type until 30 player names, including their shirt numbers and positions. It doesn't have to be based on shirt number order. You can find this squad internet site easily. At the right columns, next to each player name columns, you will see their stats. These numbers will be updated automatically based on stats you put in the Team Match Stats box (part B). 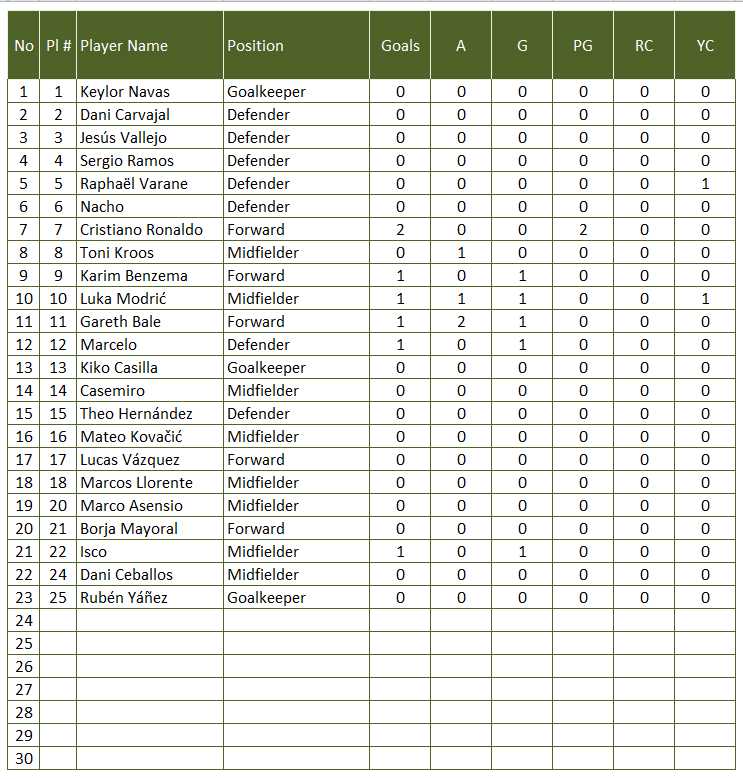 It is possible that the number of players you found in the internet within one team exceeds 30 players. In that case, you must select players who contribute more in this squad list.

Update match results in this match stats boxes. There are 38 matchboxes for La Liga, Serie A and Ligue 1. I used Real Madrid as a sample. This team is always on the left side. You can see them playing home or away by seeing Home/Away note at Home/Away column. 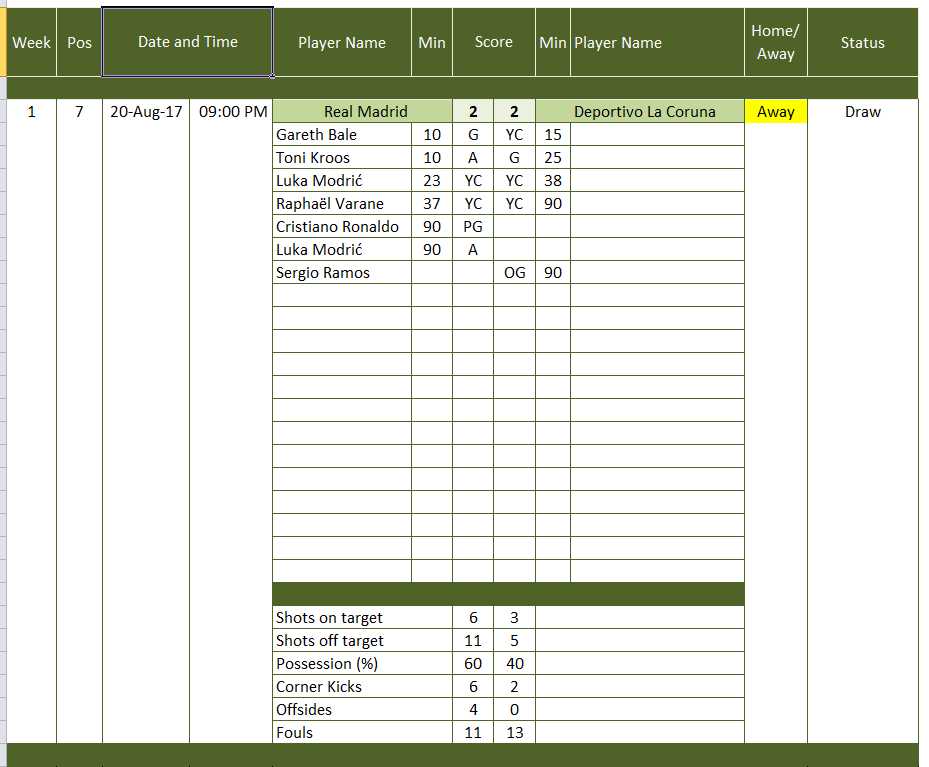 Remember, these match stats boxes are not designed to record all match statistics. You may need other spreadsheets for that purpose.

There are 20 lines to log players with goals, assists and cards. I put dummy data in the first match box to help you understand how to fill it. To update it, select player name, time (in minute) and its category code. Filling the opponents box is optional since no data are collected from opponent side, except their goal's code. Its goal code will be used in goal distribution chart.

Also, when there is an own goal, you can select OG and doesn't have to put the player name. You can put the player's name, but you must select it from the opposite side.

Below that 20 lines, there are six lines to put other match stats. Those are Shots on target, Shots off target, Possession (%), Corner Kicks, Offsides and Fouls.

I grouped match 3 onward where you can expand to type match stats and collapse it to shorten the view. You still can see the score results, though.

The rank formula will sort all goal scorers by their goals and assist numbers. There are Spanish La Liga, Italian Serie A, Germany Bundesliga and French Ligue 1 spreadsheets you can download to track top goal scorers in those leagues. Like Lionel Messi from Barcelona in Spain, Gonzalo Higuain from Juventus in Italy, Lewandowski from Bayern Munich in Germany and Cavani from Paris SG from France. 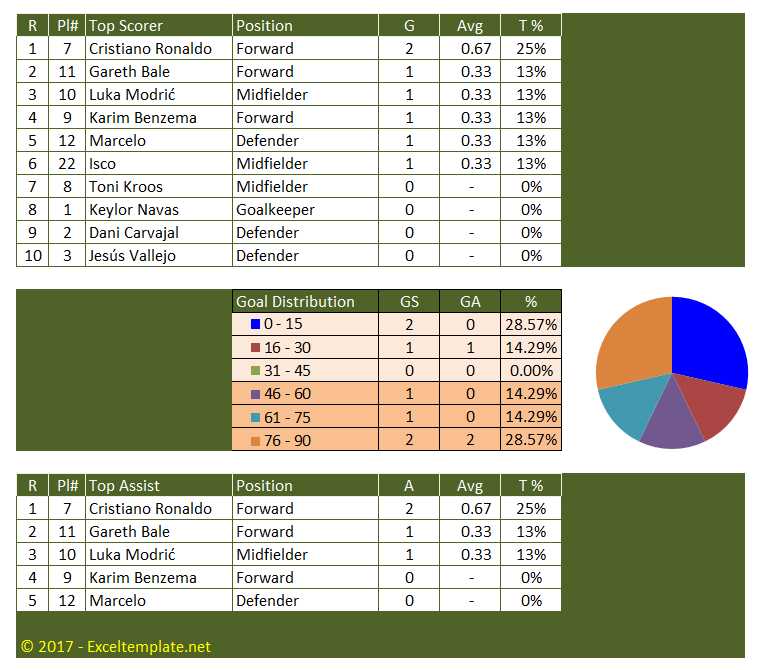 You can see your top players in assists.

This chart will show you team performance match by match. The top part will visualize win-Draw-Lose result. You can directly see whether their Home and Away matches affected their performance by seeing green and yellow color below it.

I add visualization of team possession to ease you seeing whether dominating the match will always give the team positive result. At the bottom of the chart, you can see their standing progress throughout the entire season.

As informed, there are limitation in the simple version. As a result, you can't maximize all of the available features. You can upgrade it to Pro version to fully maximize it. Since it is unprotected, you can use it every year by updating team names and their fixtures. You can also use it to emulate other leagues. There are features comparison between Simple and Pro versions that you can read in About worksheet. I wish I could publish England Premier League fixtures. It should be interesting to track Manchester United, Manchester City, Chelsea, Arsenal, and other teams especially if the race is as tight as last year.

You can download European Soccer League Fixtures and Scoresheet if you do not need these Top Scorer and Team Stats Log features. Also, try Soccer Team Stats Tracker as well if you want to record complete statistic of particular team matches.