Just because you’ve typed FADE OUT on the final draft of your script doesn’t mean your work is over, especially if you’re producing the film yourself. Once you’ve found your locations, actors, and crew, creating a shooting schedule or shot list for your production is an excellent way to create a roadmap of how you envision the film process unfolding.

A shooting schedule is a detailed list of every scene in your film, broken down into all the relevant pieces of information the cast and crew need to know. How many scenes are being shot during the day? How many outdoors vs. indoors? How many on a specific day in March? How many are being shot at your friend’s house? A shooting schedule provides all this information and more. It helps the entire team track the progress of the film and (hopefully) deliver on time.

If you’ve never created a shooting schedule before, it can seem like a lot of work when all you really want is to start filming. But every major independent and studio film goes through this process in order to make production more efficient. In the industry, these schedules are often called “strip boards” or “production boards,” depending on how they’re organized and laid out. No matter what they’re called, at the end of the day they all follow the same general principles. They outline the major scenes to be filmed, along with all the necessary information the production team needs.

With our free shooting schedule template, you will be one step closer to turning your script into reality.

A shooting schedule is a breakdown of every scene in your film, along with important cast/crew information. It’s important to note that this is not a schedule of scenes as they appear in your script, but instead an organized list of the order in which your scenes will be shot.

A production schedule is a schedule of the entire production process, including pre-production, filming, and post-production. This will help visualize how long it will take to truly complete the entire film.

Why Use This Template?

There are many great options for you to choose from when it comes to planning out your next film. From Cloud-based software to screenwriting tools that double as shooting schedules, you have alternatives. But why learn the nuances of a new online software when our templates are free and easy to use? We’ve preformatted the templates so that once you’re done filling it out, simply print and go!

How to Use the Shooting Schedule Template

There are ten columns in this template. Once complete, you’ll have a comprehensive schedule of how your film will be shot. Almost every piece of information your cast and crew need to know will be organized for them to see at a glance.

Below is a breakdown of the purpose for each column in the template.

The template currently comes with scenes number 1-100, but you can easily add on to the template. Most full-length templates contain around 40-60 scenes, but the purpose of a shooting schedule is to block out each individual segment of production. You may film half a scene in one location and half somewhere else. You may have to shoot over multiple days or during different parts of the day. The shooting schedule will allow you to be as granular as possible so that your entire production team is on the same page.

Columns 2-4 in the template help outline the information found in each scene heading within your script. These scene headings, also known as the “Sluglines,” describe the location and time of day in which the scene is taking place.

Information included in each slugline within a script:

This simple slugline tells us the scene is taking place in Dave’s office during the day. Columns 2-4 of the template allow you to transfer this data accurately from script to shooting schedule.

Within this section, both scene setting and Day/Night can be selected using the data validation drop down built into the template. 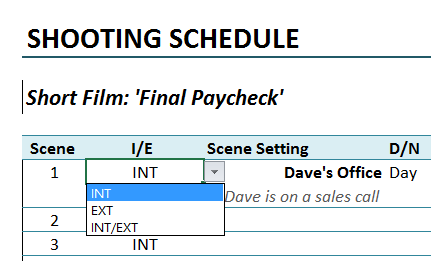 Which cast members are part of this scene? To save room on the shooting schedule, use numbers instead of full names. A list of corresponding names can be created on a subsequent tab for easy reference.

In the picture above I’ve noted that only Cast member #1 is in the scene. The second clearly shows us that cast member #1 is Alex Burke, who plays our lead character David:

You’ll use this column to detail which location you’re shooting at, in addition to any context around the location the crew may need to know. In our case, we’re shooting this office scene on set at ABC Studios.

Here you’ll enter the date upon you wish to film.

The start time of the filming on the day you shoot.

These are the page(s) in the script in which these scenes occur.

As previously stated, films are not shot in the order they appear in the script. The shooting schedule we’re creating is ordered based on which scenes we’re going to shoot first, second, third, etc..

The scene we’re shooting in Dave’s Office is the first scene of the day, but the scene in the film doesn’t occur until pages five and six. Dave’s office could be easier to film for a variety of reasons, from the actor’s availability, the crew’s availability, or even that of ABC Studios.

If any additional context or notes are needed, this is the place to add it. In this scene, Dave calls one of his most important clients in hopes of renewing a contract for the new year. He is rejected.

Notes like this are important to help frame what the crew should be prepared for. Perhaps there are additional set pieces needed or small props. Does it make emotional sense to lead with this scene? Could it be filmed later in the day after another scene? It’s discussions like this that can happen once a thoroughly fleshed out shooting schedule is put together.

How to Use the Production Schedule Template

While the shooting schedule breaks down every scene in your film, the production schedule is a detailed account of how long each part of the filming process takes.

This column notes at which stage in the process you’re at, not to be confused with which “stage” you may be filming a scene. Broadly speaking, there are three major phases to any production:

Above is a copy of our production schedule. We can see that between all the various parts of our production, the entire operation spans about two months. Let’s dive in a little more to each part of this template.

What specifically is taking place during this part of the production process? During pre-production, we might be finalizing certain parts of the process, preparing for shooting, and locking down the final crew.

This is the start and end date of this part of the filming process. As you can see from the template above, these dates can overlap, and often do on bigger budget films.

How many days are in between the start and end date of this part of the production? This value is automatically calculated within Excel based on the Start and End dates you’ve entered.

What is the location? Studio? On Location? Where are you shooting for that time period?

Who’s running point on this part of the project? Who is responsible? In addition to names, it may be helpful to add phone numbers and/or email addresses for important contacts (just in case).

Are there any other instructions or notes that the crew should know about this part of the production schedule? Any props, special equipment, or costumes needed? This section could be used to inform the crew of those needs, or provide any special contact information someone might need to know in a pinch.

In conclusion, these two templates together will give you, your cast, and your crew a clear picture of the film you’re making. Once you’ve finalized the script and the planning begins, tools like this will help crystallize your vision, help you lead the film to its completion, and ultimately get it into the hands of viewers. Best of luck on your film-making journey. 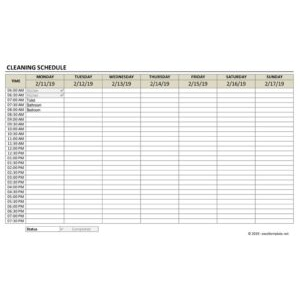 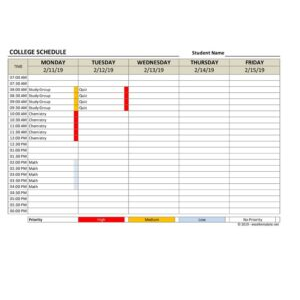 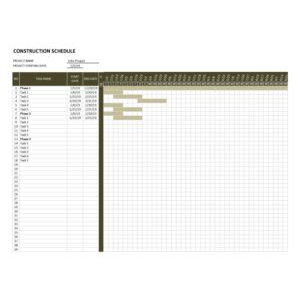 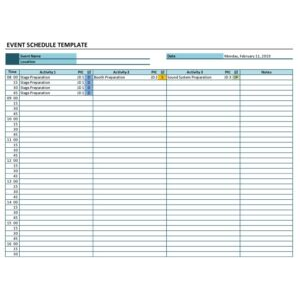 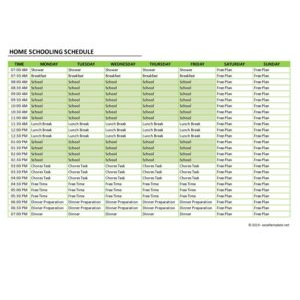