This is a 2018 Formula 1 Dashboard and Championship Tracker spreadsheet. If you have ever used this spreadsheet, you will see the same dashboard and race circuit layouts with previous published spreadsheets.

This is my 8th year Formula 1 spreadsheet. You can use the previous versions since it has similar layout and you can change circuit names in particular worksheet. This automatic circuit adjustment capability will allow you to modify it easily where you don't have to wait for new spreadsheet is coming up or or if there is any policy changes in the middle of the season because of unexpected conditions. It happened in year 2014 and 2015 where I have to wait one week prior to the first race before published it just to make sure that the planned race circuit didn't change. It is changed in the middle of the season though. And it made me to modify and republished it again.

Also, each year there is always been a changing of circuit order where I have to edit each circuit worksheets because points calculation in driver standing is referred to worksheet orders. I already thought about adding automatic capability since 4 years ago but I haven't had a time to modify it... until last year. With this spreadsheet, you don't have to wait for me uploading the new or modified one because you can edit it by yourself. You can modify teams, drivers and circuits without worrying about meshing up with the excel formulas inside. It is still protected though. You still need to purchase the fully editable version if you want to modify its layout or learn its chart/standing codes.

You still need to change the flag manually, because the automatic flag adjustment function requires higher computer speed which it could annoy you while updating the score. You will see that if you change the circuit orders or add/remove one circuit, the flag will remain unchanged. Anyway, I you can have both spreadsheets if purchased the editable version so you can test it before selecting the suitable one.

The first race of 2018 Formula 1 season will start at 25th March 2018, in Albert Park, Melbourne, Australia. This race circuit has always become the opening race for the past five years. And for year 2016 and 2017, winners of this circuit has been crowned as a Formula 1 Champion by the end of the season. With a promising testing result for Ferrari and other Team, it should be interesting to see whether their results can be mapped in racing season to dethrone Mercedes, the reigning champion.

If you are already familiar with this previous Formula 1 Dashboard and Tracker spreadsheets, you can start using this template and learn how to modify circuit orders from Modify Circuit link in Team and Driver setup worksheet. If you are new, you can follow brief steps below :

To add new team and drivers

That's all guys. If you are a MotoGP fans, you can download the MotoGP Dashboard and Championship version that is built with similar structure with this spreadsheet. 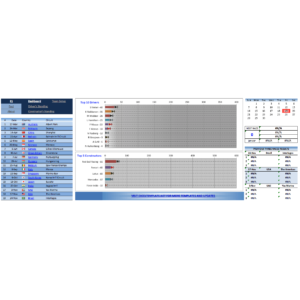 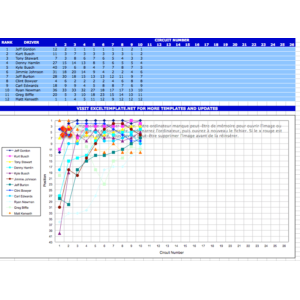